A day on the Delaware River is truly a journey through geological time and human history. The landscape shows evidence of the interrelationship of people and place. It crosses five topographic regions. A wide variety of geological structures can be found within these regions and river travelers can observe these in the different rock formations. Stone walls, farmhouses, bridge piers, and other structures reveal the local geology through the materials used in their construction.

The Appalachian Plateau, containing the river’s headwaters, and the Ridge and Valley Province are part of the Upper Delaware. This is a hilly landscape, dominated by rocky rapids. Remains of a canal and the oldest existing wire suspension bridge in the nation reveal attempts to get around natural obstacles to trade and settlement.

The Middle Delaware includes part of the Ridge and Valley Province and Reading Prong (also known as the Highlands). Its most distinctive feature is the tight “S” curve through Kittatinny Ridge—the Delaware Water Gap. The spectacular views from the hills and the cool mountain air attracted people to the area in the 19th century.

Further downriver, the Lower Delaware includes the Piedmont, and the Coastal Plain surrounding the Delaware Bay. The gently rolling hills and fertile soils of the Piedmont led to early settlement and continued development in river towns such as Trenton, New Jersey and New Hope, Pennsylvania. Milford Bluffs is a distinct geologic formation, with a red color due to high iron content.

A temperate climate and bountiful supply of water, wildlife, timber, minerals, and fertile soils have attracted humans dating back 12,000 years when Paleo-Indians first camped along the Delaware. The Lenni Lenape built permanent villages along the Delaware River and many of its tributary streams and lakes. The Lenape paddled dugout canoes on the river a thousand years before European colonists appeared.

During the 18th and 19th centuries, the Delaware River was the political, revolutionary, agricultural, and industrial center of the United States. The river and its canal systems were used to transport enormous quantities of lumber, anthracite coal, iron, and agricultural goods to New York and Philadelphia. A critical event in American history, “Washington Crossing the Delaware,” is surely the nation’s most famous image of a river crossing. 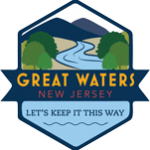